The introduction of pure oxygen to integrate or replace oxygenation with air in fish farming tanks can prevent and solve several problems, for example the increase in the oxygen requirement during feeding, which can deplete the amount of O2 dissolved in the tank, or a reduction in the efficiency of dissolving of oxygen from the air with high environmental temperatures in the hottest periods of the year, factors that play a fundamental role in guaranteeing healthy development and optimal weight increase in the fish. The use of SOL oxygen not only improves the state of health of the fish, in particular for fish larvae, but also guarantees remarkable flexibility in the choice of the production site and the management of the farm, permitting, for the same production levels, lower water consumption, better control of emissions, smaller tanks and so a greater concentration by weight of fish per unit volume. In other words, it is possible to increase the production of the fish farm with the same tank volume and water consumption.

Since the saturation concentration in water of pure oxygen is about five times greater than that of atmospheric oxygen, the correct concentrations of dissolved oxygen can be restored five times faster with pure O2: the systems offered by SOL exploit this property and can be installed on the surface of the tanks next to the spillways, even if not very high, or can use submerged injectors. 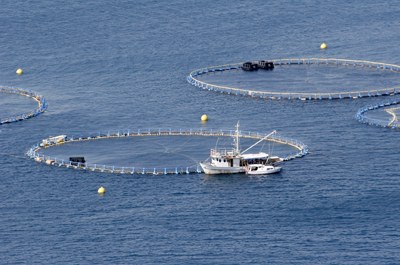